1849 The Rush That Never Started 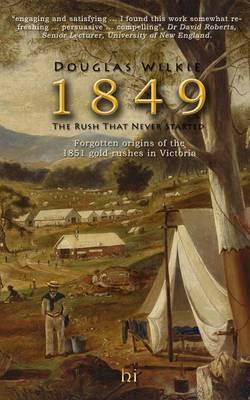 1849 The Rush That Never Started

Professor Emerita Susan Ballyn, University of Barcelona, Barcelona, Spain: …covers new and unexplored ground regarding the first discovery of gold in Australia and of the socio/politics of the time that left this event relatively unexplored and relegated to mere references even in the work of historians such as Blainey. Dr David Roberts, Senior Lecturer, University of New England, Armidale, NSW: … engaging and satisfying … I found this work somewhat refreshing … it demonstrated an intimacy and depth of knowledge that was persuasive and sometimes compelling … allowed us to get beneath the skin of the people, and to see possible connections between a variety of episodes, many of which have certainly been underappreciated and misunderstood in existing literature. Many people have the impression that the Victorian gold rushes not only began in mid-1851, but also occurred in response to discoveries earlier in that year near Bathurst, west of Sydney. Not so! The Victorian gold rushes of 1851 were a direct consequence of a largely forgotten gold discovery two years earlier in the Pyrenees Ranges of the Port Phillip District. This is the story of how, in the summer of 1849, one shepherd and three ex-convicts started a gold rush involving hundreds of Melbourne residents. The story of how Charles La Trobe, the Superintendent of the Port Phillip District, discouraged gold mining until after Port Phillip’s separation from New South Wales to ensure the revenue would be expended solely for Victoria’s benefit. To open a gold field while Port Phillip was still part of New South Wales would be to hand the benefits to Sydney. It is the story of how those accredited with the 1851 gold discoveries, such as Edward Hargraves, were influenced by the actions of those involved in 1849 Pyrenees discovery.