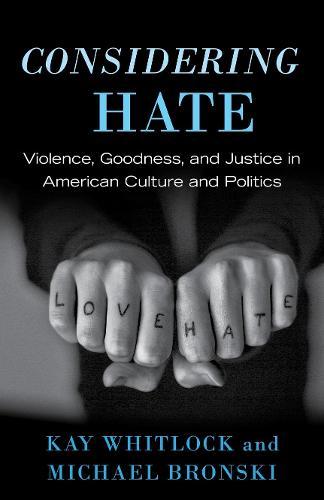 A provocative book about rethinking hatred and violence in America Over the centuries American society has been plagued by brutality fueled by disregard for the humanity of others- systemic violence against Native peoples, black people, and immigrants. More recent examples include the Steubenville rape case and the murders of Matthew Shepard, Jennifer Daugherty, Marcelo Lucero, and Trayvon Martin. Most Americans see such acts as driven by hate. But is this right? Longtime activists and political theorists Kay Whitlock and Michael Bronski boldly assert that American society’s reliance on the framework of hate to explain these acts is wrongheaded, misleading, and ultimately harmful. All too often Americans choose to believe that terrible cruelty is aberrant, caused primarily by extremists and misfits. The inevitable remedy of intensified government-based policing, increased surveillance, and harsher punishments has never worked and does not work now. Stand-your-ground laws; the US prison system; police harassment of people of color, women, and LGBT people; and the so-called war on terror demonstrate that the remedies themselves are forms of institutionalized violence. Considering Hate challenges easy assumptions and failed solutions, arguing that hate violence reflects existing cultural norms. Drawing upon social science, philosophy, theology, film, and literature, the authors examine how hate and common, even ordinary, forms of individual and group violence are excused and normalized in popular culture and political discussion. This massive denial of brutal reality profoundly warps society’s ideas about goodness and justice. Whitlock and Bronski invite readers to radically reimagine the meaning and structures of justice within a new framework of community wholeness, collective responsibility, and civic goodness. From the Hardcover edition.