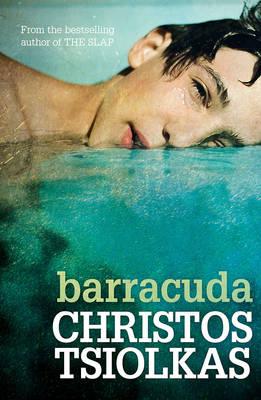 ‘He asked the water to lift him, to carry him, to avenge him. He made his muscles shape his fury, made every stroke declare his hate. And the water obeyed; the water would give him his revenge. No one could beat him, no one came close.’
His whole life, Danny Kelly’s only wanted one thing: to win Olympic gold. Everything he’s ever done - every thought, every dream, every action - takes him closer to that moment of glory, of vindication, when the world will see him for what he is: the fastest, the strongest and the best. His life has been a preparation for that moment. His parents struggle to send him to the most prestigious private school with the finest swimming program; Danny loathes it there and is bullied and shunned as an outsider, but his coach is the best and knows Danny is, too, better than all those rich boys, those pretenders.
Danny’s win-at-all-cost ferocity gradually wins favour with the coolest boys - he’s Barracuda, he’s the psycho, he’s everything they want to be but don’t have the guts to get there. He’s going to show them all. He would be first, everything would be all right when he came first, all would be put back in place.  When he thought of being the best, only then did he feel calm. Should we teach our children to win, or should we teach them to live? How do we make and remake our lives? Can we atone for our past? Can we overcome shame? And what does it mean to be a good person?
A searing and provocative novel by the acclaimed author of the international bestseller The Slap, Barracuda is an unflinching look at modern Australia, at our hopes and dreams, our friendships, and our families. It is about class and sport and politics and migration and education. It contains everything a person is: family and friendship and love and work, the identities we inhabit and discard, the means by which we fill the holes at our centre. Barracuda is brutal, tender and blazingly brilliant; everything we have come to expect from this fearless vivisector of our lives and world.

After the success of 2008’s The Slap, Christos Tsiolkas could be excused for feeling he had nothing more to prove. Perhaps, though, it was that unexpected good fortune that planted one of the seeds for Barracuda, surely Tsiolkas’s most personal and heartfelt book to date, and I think his most accomplished.

Danny Kelly is a talented swimmer, but from the wrong side of the tracks. Working class, and a wog to boot, he cops his fair share of harassment at the boys’ private school he attends on a sporting scholarship, but his ability in the pool soon becomes his secret weapon against his abusers. Until, that is, his prowess starts to go awry (mentally as much as physically) and Danny is forced to find his base – and his future – from within, not without.

To start to summarise Barracuda though is to diminish this big, sprawling, ever-so-affecting book. The structure is a feat in itself: Tsiolkas runs a dual narrative throughout, alternating between Danny’s schooldays and his life (as Dan) ten years on, which includes time spent with his partner Clyde in Scotland, the homeland, as it happens, of his migrant father Neal.

This is vintage Tsiolkas. He writes uncompromisingly about the way we live now, unafraid to address the many unspoken issues that taint our society – be they class division, racism, craven Indigenous and refugee politics, or simply the pervasive ‘comfortableness’ and insularity of the Australian body politic. And for all the cultural critique there is no shortage of comic barbs: I guffawed audibly when Danny’s school is given the nickname ‘Cunts College’ near the beginning of the novel, and enjoyed Danny’s rumination on the finer points of his classmates spending their summer holidays in Portsea and Sorrento as opposed to Rye and Rosebud. What is new here is the expanded emotional register: the emphasis on the importance of home, of fraternity, of belonging, of a language beyond words to forge our bonds.

Finally an aspect that I can’t help but read autobiographically: Dan declares his indebtedness to the discovery of literature in his 20s, and several wonderful little paeans to writers such as Faulkner, our own David Malouf, Chekhov and Graham Greene follow. When Dan is questioned by a librarian as to why he isn’t interested in ‘more modern stuff’ he responds that ‘the contemporary writers annoyed him, he found their worlds insular, their style too self-conscious and ironic’.

To be sure none of those descriptors apply to our contemporary Tsiolkas – quite the opposite in fact. The beautiful ugliness that is Australia has found its chronicler in Tsiolkas, and we know ourselves better and are the richer for it. Our world has been Tsiolkasised. On the strength of Barracuda, there is not a more important writer working in Australia today.

END_OF_DOCUMENT_TOKEN_TO_BE_REPLACED

He loses everything. In front of everyone. Where can he go from here? Barracuda is the blazingly brilliant new novel from the author of the phenomenal bestseller The Slap.

Daniel Kelly, a talented young swimmer, has one chance to escape his working-class upbringing. His astonishing ability in the pool should drive him to fame and fortune, as well as his revenge on the rich boys at the private school...