When this thing happened: the story of a father, a son, and the wars that changed them 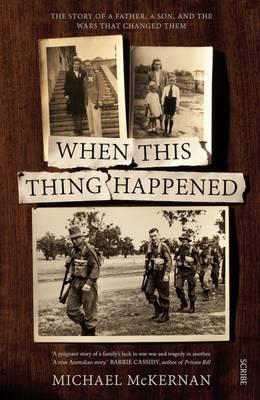 When this thing happened: the story of a father, a son, and the wars that changed them

A tour de force about the impact of war on one family over the twentieth century. As deputy director of the Australian War Memorial for many years, Michael McKernan had heard and written about many stories of war. For him, war was never about the big picture; it always came down to the individual. Yet little did he know when he met his future wife in 1989 that her father would soon be telling him, over many leisurely afternoons, his own story, of being made a slave to the Nazis in the Second World War, and its unforeseeable consequences.

One of these consequences was that Mychajlo Stawyskyj’s son Joe would grow up in Australia in time to be sent to fight in Vietnam, where he would become one of that war’s worst casualties. Drawing on his authoritative grasp of twentieth-century history, and in particular military and social history, Michael McKernan pieces together the disrupted lives of his father-in-law and brother-in-law, creating a compelling narrative of general interest, as well as an unforgettable story about the cost of war to one Australian family.