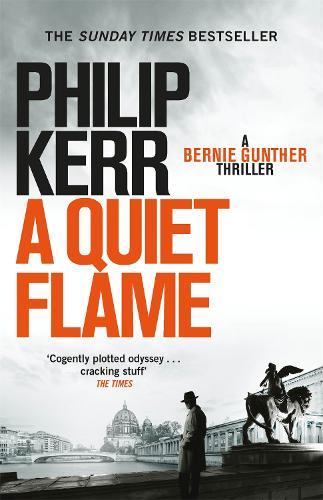 ‘One of the greatest anti-heroes ever written’ LEE CHILD Posing as an escaping Nazi war-criminal Bernie Gunther arrives in Buenos Aires and, having revealed his real identity to the local chief of police, discovers that his reputation as a detective goes before him. A young girl has been murdered in peculiarly gruesome circumstances that strongly resemble Bernie’s final case as a homicide detective with the Berlin police. A case he had failed to solve. Circumstances lead the chief of police in Buenos Aires to suppose that the murderer may be one of several thousand ex Nazis who have fetched up in Argentina since 1945. And, therefore, who better than Bernie Gunther to help him track that murderer down?

I must admit to being completely partial on the subject of Philip Kerr’s books; I thought his The One From The Other (Quercus, 2006) was one of the best crime books I’d ever read, up there with The Hound of the Baskervilles and The Murder of Roger Ackroyd.

A Quiet Flame picks up where it left off, with Bernie Gunther arriving in Argentina, where he has been forced to flee after being framed as a Nazi war criminal. Having convinced the Argentine president, Juan Peron, of his true identity, Gunther finds himself recruited to solve two brutal murders. Two teenage girls have been found murdered, and the case bears a striking similarity to one Gunther investigated years earlier in Berlin. The murderer was never caught, and there seems every reason to believe he may now be at loose in Argentina. But taking on the case unleashes a can of worms that cuts right to the heart of Peron’s brutal dictatorship, and Gunther finds himself set for another hair’s-breadth escape from death. Here’s hoping there’ll be plenty more Bernie Gunther mysteries to come!

END_OF_DOCUMENT_TOKEN_TO_BE_REPLACED

A Man Without Breath: fast-paced historical thriller from a global bestselling author

If the Dead Rise Not: Bernie Gunther Thriller 6

END_OF_DOCUMENT_TOKEN_TO_BE_REPLACED

Bernie Gunther, the iconoclastic private-eye, is the ideal narrator for Philip Kerr's bleak tale of the dirty deals made by victors and vanquished alike in post-war Germany in the fourth book in this internationally bestselling...

Bernie Gunther, Berlin's hardest-boiled private eye, returns in the fifth book in this internationally bestselling series. Moving the plot from Pre-War Germany to the dangers of Argentina, Kerr yet again delivers a powerful,...

A combined edition of: March Violets , The Pale Criminal , and, A German Requiem .

Hitler’s Peace: A Novel of the Second World War

From the author of the Berlin Noir trilogy comes a stunning World War II what if thriller in which the fate of Europe--and of its remaining three million Jews--hangs in the balance.