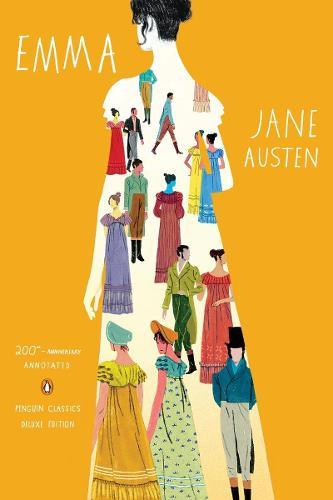 A stunning 200th anniversary edition of Jane Austen’s classic romance comedy The culmination of Jane Austen’s genius, a sparkling comedy of love and marriage-now in a stunning 200th-anniversary Penguin Classics Deluxe Edition Now a major motion picture starring Anya Taylor-Joy Beautiful, clever, rich-and single-Emma Woodhouse is perfectly content with her life and sees no need for either love or marriage. Nothing, however, delights her more than interfering in the romantic lives of others. But when she ignores the warnings of her good friend Mr. Knightley and attempts to arrange a suitable match for her protegee, Harriet Smith, her carefully laid plans soon unravel and have consequences that she never expected. With its imperfect but charming heroine and its witty and subtle exploration of relationships,Emmais often seen as Jane Austen’s most flawless work. This Penguin Classics Deluxe Edition celebrates two hundred years of Austen’s beloved novel. With a beautiful cover designed by illustrator Dadu Shin and comprehensive notes drawing specially from the Jane Austen Collection at Goucher College, this is an edition to be treasured by students and collectors alike. For more than sixty-five years, Penguin has been the leading publisher of classic literature in the English-speaking world. With more than 1,500titles, Penguin Classics represents a global bookshelf of the best works throughout history and across genres and disciplines. Readers trust theseries to provide authoritative texts enhanced by introductions and notes by distinguished scholars and contemporary authors, as well as up-to-datetranslations by award-winning translators.