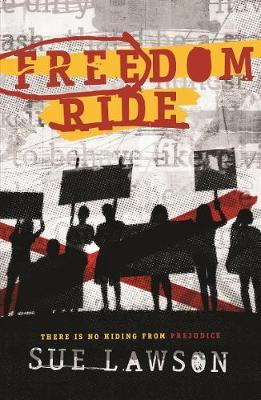 Robbie knows bad things happen in Walgaree. But it’s nothing to do with him. That’s just the way the Aborigines have always been treated. In the summer of 1965 racial tensions in the town are at boiling point, and something headed Walgaree’s way will blow things apart. It’s time for Robbie to take a stand. Nothing will ever be the same.

Student activists have long been the agents of social change. Following the ‘Freedom Rides’ held in the USA in 1961 to protest against discriminatory segregation of Black Americans, a group of Sydney students embarked on a protest of their own. The students launched the Australian Freedom Ride in 1965 and sought to challenge entrenched bigotry and prejudice levelled at Aboriginal Australians, taking their protest to rural towns in Australia where racist attitudes were most evident.

History has many examples of social justice activism of this kind. The 1967 Referendum to remove two references in the Australian Constitution that discriminated against Aboriginal Australians was in part brought about by the campaigning efforts of students like these who cast a spotlight onto injustice. But when individuals stand up on their own and fight for what’s right, even as it sets them apart from their family, friends and community, now that is inspiring!

Robbie, the protagonist of Sue Lawson’s Freedom Ride, has just such a story. Unsettled by the discriminatory treatment of Aboriginal people and the parochial attitudes of his hometown, Robbie finds mutual understanding in a new friendship with Barry Gregory, whose progressive views have made him the town’s misfit. This friendship gives Robbie the courage to speak out against social injustice and the support to confront a personal wrong as well. By the time the Freedom Ride rolls into town, Robbie stands strong and finds the freedom to set his own course, on his own terms.

This is an inspiring and historically significant work that forces us to confront the racism of our past.

Nujeen: One Girl’s Incredible Journey from War-Torn Syria in a Wheelchair

END_OF_DOCUMENT_TOKEN_TO_BE_REPLACED

Robbie knows bad things happen in Walgaree. But it's nothing to do with him. That's just the way the Aborigines have always been treated. In the summer of 1965 racial tensions in the town are at boiling point, and something headed...

One moment. One pause. One whole new life. Declan seems to have it all: a family that loves him, friends he's known for years, a beautiful girlfriend he would go to the ends of the earth for. But there's something in Declan's past...

Rich and Rare: A Collection of Australian Stories, Poetry and Artwork Edited by Paul Collins