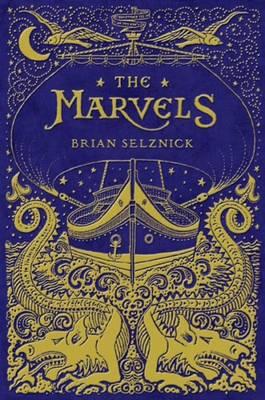 In this magnificent reimagining of the form he originated, two stand-alone stories-the first in nearly 400 pages of continuous pictures, the second in prose-create a beguiling narrative puzzle.

The journey begins on a ship at sea in 1766, with a boy named Billy Marvel. After surviving a shipwreck, he finds work in a London theatre. There, his family flourishes for generations as brilliant actors until 1900, when young Leontes Marvel is banished from the stage. Nearly a century later, Joseph Jervis runs away from school and seeks refuge with an uncle in London. Albert Nightingale’s strange, beautiful house, with its mysterious portraits and ghostly presences, captivates Joseph and leads him on a search for clues about the house, his family, and the past.

A gripping adventure and an intriguing invitation to decipher how the two narratives connect, The Marvels is a loving tribute to the power of story from an artist at the vanguard of creative innovation.

Brian Selznick is an innovative storyteller who uses both intricate hand drawings and text to tell his stories. His middle-grade novels, The Invention of Hugo Cabret and Wonderstruck, are contemporary classics. The Marvels is perhaps even more extraordinary than its predecessors, consisting of two linked stories, the first told entirely in beautiful drawings.

It begins with a shipwreck in 1766 and the sole survivor, Billy Marvel, is devastated by the death of his brother Marcus. In London, Billy joins the crew building the Royal Theatre. Generations of Marvels then grow up in the theatre and on stage. Tragically, a fire later destroys the theatre, but do the Marvels escape?

The second story begins in 1990 with young Joseph Jervis, who is running away from boarding school to find his uncle, who lives in London’s East End. What he uncovers at his uncle’s candlelit 18th century house is extraordinary and links these two stories in an entirely unexpected way.

This wonderful book is Selznick’s homage to Dennis Severs’ house in London, a living museum that has recreated life in the 18th century. Both adults and readers aged 10 and up will be captivated by the story, the stunning illustrations and the mystery encased within both.

END_OF_DOCUMENT_TOKEN_TO_BE_REPLACED

Queer Heroes: Meet 53 LGBTQ Heroes From Past and Present!

To Night Owl, From Dogfish

What is Gender? How Does It Define Us? And Other Big Questions for Kids