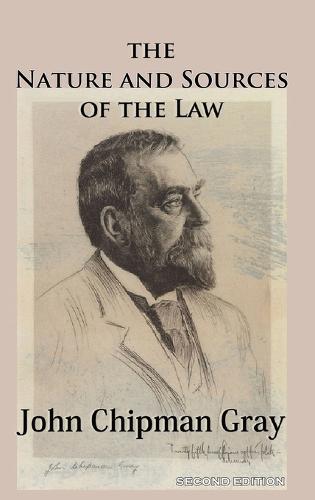 THE NATURE AND SOURCES OF THE LAW is a legal and jurisprudential classic, now available in a library-quality but affordable hardcover edition, featuring a modern, legible presentation. Quid Pro’s republication of the Second Edition, 1921, of Gray’s foundational book features updated formatting, hyper-accurate reproduction, consistency with the new eBook edition, embedded page numbers from the original printings (aiding citation, referencing, and as classroom assignment), and new Notes of the Series Editor (Steven Alan Childress, a senior professor of Law at Tulane University). [NOTE: these features are only available from editions by Quid Pro Books, even if this description appears under ‘facsimile’ or ‘OCR’ offerings from other presses, or under used copies of old versions.] - Most reprints of this classic text, at any price, follow the previous ‘first edition’ and are merely photocopied versions of that 1909 text. - John Chipman Gray was a noted lawyer and legal scholar of the progressive era, a professor at Harvard Law School, and a founder of the Boston law firm Ropes & Gray. His important book analyzed the uses of precedent and custom, the meaning of law and legal rights, the differences between common law and civil law reasoning, deference to and interpretation of statutes and their occasional obsolescence, the role of morality and popular will, and the philosophical failings of Austin, Blackstone, and German thinkers of the day. It is a remarkable set piece in legal theory and history. Gray’s anatomy of the concept of law is part of the canon of legal thought from the progressive era. - Legal Legends Series editions of classic works of law and political philosophy from Quid Pro are unlike any new versions available today. Also in the Series are explained and introduced editions of Cardozo’s THE NATURE OF THE JUDICIAL PROCESS (with new material by Harvard’s Andrew Kaufman), Holmes' THE [ANNOTATED] COMMON LAW (adding 200 simple explanatory notes), Holmes' THE PATH OF THE LAW and Warren and Brandeis' THE RIGHT TO PRIVACY (with additions by Steven Alan Childress of Tulane), Llewellyn’s THE BRAMBLE BUSH (with new introduction by Wisconsin’s Stewart Macaulay), and three works by Woodrow Wilson. These are available in print and digital formats from leading booksellers.