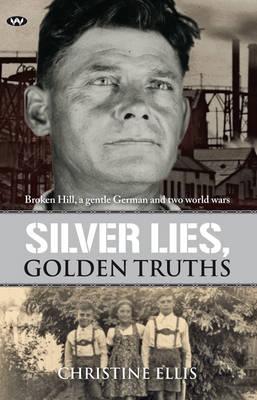 Reinhold (Jack) Schuster was an illegal German immigrant. A trained soldier in the German Armeekorps, he sat out both world wars in the Australian outback of Broken Hill. Jack’s story debunks the myth that salutes the mining town as the birthplace of solidarity - by exposing divisiveness, prejudice and powerlessness.
The only enemy attack to take place on Australian soil during World War I occurred in Broken Hill, and Jack was there to witness the mob violence that followed. He watched unionists stone the troop trains heading off to war and learned of brutality against his countrymen in the Torrens Island internment camp.
Christine Ellis’s grandfather came to life through stories told by her mother - some of which defied belief. Christine’s research confirmed them. Silver Lies, Golden Truths is Jack Schuster’s story. It tells of the love between a father and his young daughter, of idyllic family times, and the cruel cost of working in the mines.
‘A timely, heartbreaking re-imagining of war and peace in the Silver City.’ - Peter Goers
$47.99Add to basket ›