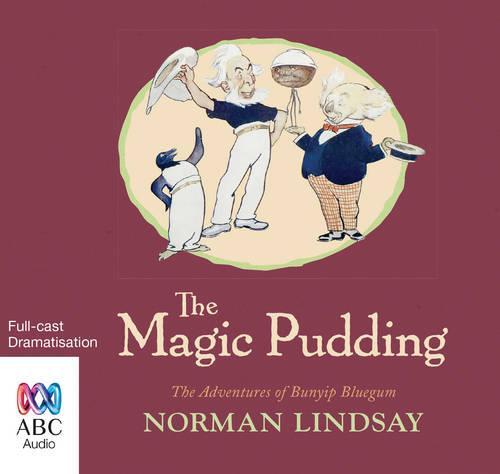 The Magic Pudding is a pie, except when it’s something else, like a steak, or a jam donut, or an apple dumpling, or whatever its owner wants it to be. And it never runs out. No matter how many slices you cut, there’s always something left over. It’s magic.
But the Magic Pudding is also alive. It walks and it talks and it’s got a personality like no other. A meaner, sulkier, snider, snarlinger Pudding you’ve never met. So Bunyip Bluegum (the koala bear) finds out when he joins Barnacle Bill (the sailor) and Sam Sawnoff (the penguin bold) as members of the Noble Society of Pudding Owners, whose ‘members are required to wander along the roads, indulgin’ in conversation, song and story, and eatin' at regular intervals from the Pudding'.
$24.95Add to basket ›

END_OF_DOCUMENT_TOKEN_TO_BE_REPLACED

The adventures of those splendid fellows Bunyip Bluegum, Bill Barnacle and Sam Sawnoff, the penguin bold, and of course their amazing, everlasting and very cantankerous Puddin'.

The adventures of those splendid fellows Bunyip Bluegum, Bill Barnacle and Sam Sawnoff, the penguin bold, and of course their amazing, everlasting and very cantankerous Puddin'.