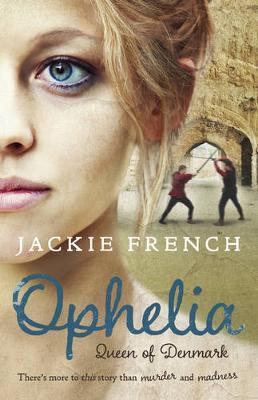 Following on from I Am Juliet, this is the second title in a proposed new series for young people that focuses on the reinterpretation of Shakespeare’s classic and enduring plays. Ages: 10+
She is the girl who will be queen: Ophelia, daughter of Denmarks lord chancellor and loved by Prince Hamlet. But while Hamlets family stab, poison or haunt one another, Ophelia plans a sensible rule, one filled with justice and the making of delicious cheeses. Even if she has to pretend to be mad to make it happen, Ophelia will let nothing, not even howling ghosts, stand in her way.
This is Shakespeares play, but with what might also have happened behind the scenes. And this story has a happy ending. From Jackie French, one of Australias most respected and awarded authors and the Australian Childrens Laureate and 2015 Senior Australian of the Year, comes a book that reimagines the life of one of Shakespeares most intriguing female characters.
$16.99Add to basket ›