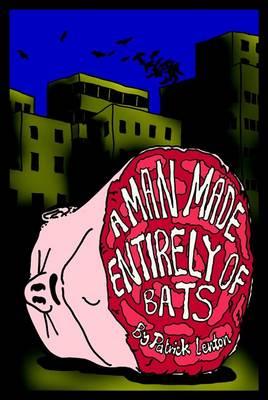 A Man Made Entirely of Bats is a collection of short stories and flash fiction by one of Australia’s newest voices. Comedic and absurd, these stories are an entertaining exploration of the concept of super heroes and of the super strange in our world.
This is well written silliness. ‘Radiocative Jerk' tells of a man bitten by a jerk who gains the exponential strength of ten jerks. ‘The Insomni-Yak' tells of a man who can’t sleep and is visited by a well-meaning yak every night. There’s lots, lots more. Plus illustrations by the talented Daniel Lethlean Higson, a designer with a love for gumpy art and ugly graphics.

The debut collection by writer, playwright and possible mad scientist Patrick Lenton pulls apart icons of 21st-century pop culture and reassembles them in an ungodly mixture of satire, fan fiction, noir, schlock horror and absurdist humour. In these tiny stories, vignettes and sketches, Lenton takes common metaphors, one-liners and eye-watering puns and riffs on them, teasing out sublime and ridiculous worlds filled with second-rate superheroes, rogue FBI agents and washed-up sitcom stars. In the opening story, ‘Mooncat’, the protagonist, who inexplicably turns into an unpleasant ginger cat every full moon, tries to turn his condition to his advantage. In ‘Sheila Discovers Magnetism’, a woman believes love to be a form of magnetic force and carries iron filings in her hand to gauge attraction. In ‘Insomni-Yak’, a man unable to sleep enlists the help of … well, take a guess.

Lenton’s writing is confident, witty and unashamedly fun, playing with genre tropes and narrative conventions. A number of pieces in A Man Made Entirely of Bats take the form of monologues, lending them the rhythm and cadences of stand-up comedy. Like any comedian, some jokes land better than others, but the delight Lenton takes in wordplay and narrative experimentation is infectious, and there are frequent moments that are laugh-outloud hilarious. But there are moments of poignancy and melancholy too, and juxtaposed against the overall playfulness and strangeness of the collection, these moments, when they come, knock the wind out of you.