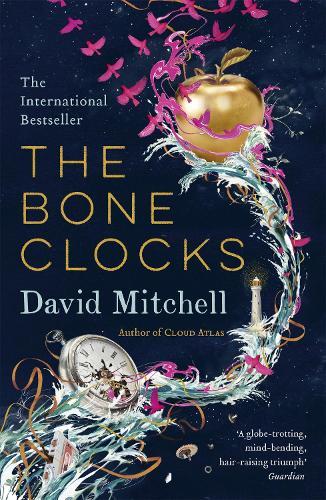 Longlisted for the Man Booker Prize 2014

The dazzling new novel from the bestselling author of Cloud Atlas.
Run away, one drowsy summer’s afternoon, with Holly Sykes: wayward teenager, broken-hearted rebel and unwitting pawn in a titanic, hidden conflict. Over six decades, the consequences of a moment’s impulse unfold, drawing an ordinary woman into a world far beyond her imagining. And as life in the near future turns perilous, the pledge she made to a stranger may become the key to her family’s survival …

Unlike Cloud Atlas, The Bone Clocks has a clear protagonist: the rebellious, clairvoyant Holly Sykes, whose life is thrown into tumult from a young age by the disembodied voices of the ‘Radio People’ and the enigmatic Ms Constantin. From this absorbing beginning, Mitchell introduces a number of intricate characters – from the conniving Hugo Lamb to the vainglorious Crispin Hershey – all of whom affect the direction Holly’s life takes. Mitchell’s mastery of narrative voice really shines here; each of his characters is unique in tone, thought and action, and no character fails to draw the reader into their own private world of intrigue.

It is difficult to classify The Bone Clocks by genre; Mitchell enjoys blending them as much as he does narrative arcs. I think it would be safe to say that The Bone Clocks has something for everyone. And, if you’re already a Mitchell fan, there is the added bonus of discovering characters already encountered in his previous works: yet another dimension to an already captivating novel.

Samuel Zifchak works as a bookseller at Readings Carlton.