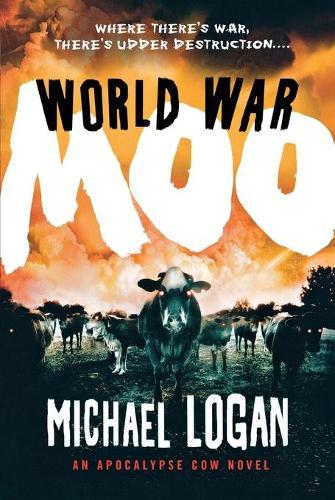 It began with a cow that just wouldn’t die. Yep. That’s right. They’re still un-dead, and now the disease has spread to humans. The epidemic that transformed Britain’s bovine population into a blood-thirsty, brain-grazing, zombie horde…err…zombie herd… is threatening to take over the globe in Michael Logan’s World War Moo.
And there’s not much time left to stop it.
All of Great Britain is infected and hungry. The rest of the world has a tough choice to make. Should they nuke the brits right off the map – men, women, children, cows and all – in the biggest genocide in history? Or should they risk global infection in a race against time to find a cure?
With hungry zombies attempting to cross borders by plains, trains, boats, and any other form of transport available, it’s only a matter of time before the virus gets out. And if it does, there’s only one answer. This means war.
$28.99Add to basket ›

END_OF_DOCUMENT_TOKEN_TO_BE_REPLACED

The City of Dreaming Books

The author of  13 1/2 Lives of Captain Bluebear  transports readers to a magical world. Optimus Yarnspinner finds himself marooned in the subterranean world of Bookholm, the City of Dreaming Books, where reading can be...

Abattoir worker Terry Borders' love life is crippled by the stench of death that clings to his skin from his days spent slaughtering cows; teenage vegan Geldof 'Scabby' Peters alternates between scratching furiously at his rash...