The League Of Regrettable Superheroes 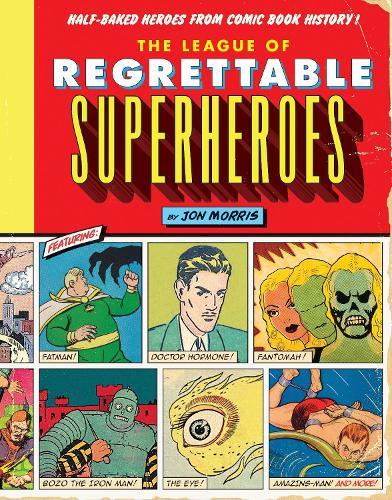 The League Of Regrettable Superheroes

A fun, funny, and affectionate look at the strangest superheroes to ever appear in comics, some so hilariously odd that it’s hard to believe they were ever published. Featuring vintage comic book art, with equally colourful commentary from a die-hard comic book blogger and cartoonist, The League of Regrettable Superheroes is a different window into the superhero phenomenon that’s become so prevalent in movies, television and pop culture.
For every Batman or Spiderman who hit the big time with a blockbuster movie, there are countless failures, also-rans, and D-listers. Some were shockingly ill-conceived, some were hilariously off-target, and some were justmind-numbingly weird. And now, finally, these long-forgotten heroes will get their day in the sun. The League of Regrettable Superheroes presents one hundred of the strangest superheroes to ever see print, complete with backstories, vintage art, and colourful commentary from author Jon Morris. Within these pages, you’ll meet heroic characters like Captain Tootsie (Tootsie Roll spokeshero) Bee Man (like Batman, but with bees!), Squirrel Girl (a rare bright spot in comics' darkest hours), Prez (America’s groovy teenage president/vampire fighter) and Skateman (roller-skated avenger in a pre-Rollerblade world).
The League of Regrettable Superheroes celebrates the artistic train-wrecks that can only happen in the anything-goes world of comics, where a creative misfire can produce entertainingly bizarre results. Drawing on the entire history of the medium, the book includes characters that haven’t seen the light of day in decades, pulling from defunct and long-forgotten comics publishers as well as DC and Marvel. Author Jon Morris, cartoonist and founder of the comic book blog Gone and Forgotten, provides insight and context, as well as curation, for this astonishing roster of not-ready-for-prime-time heroes.
$41.99Add to basket ›