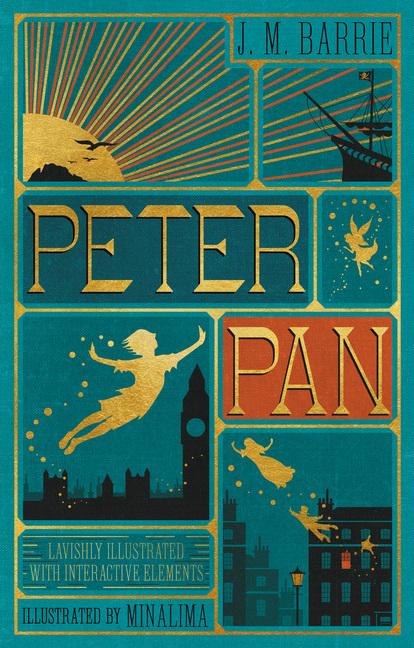 Peter Pan, J.M. Barrie’s classic children’s story about a boy who can fly and never grows up, gets re-envisioned in this delightful deluxe edition filled with brand new illustrations and ten interactive features from the award-winning design studio behind the graphics for the Harry Potter film franchise, MinaLima.

J. M. Barrie’s classic children’s story is reimagined in this delightful full-colour deluxe edition filled with all-new illustrations and ten removable features specially designed by MinaLima, the award-winning design studio behind the graphics for the Harry Potter films.
For more than a century, the adventures of Peter Pan-the boy who can fly and never grows up-and Wendy Darling have captured the hearts of generations of readers. In this enchanting illustrated volume, the fantastical world of Neverland and its magical inhabitants, including the Lost Boys, Captain Hook, Tiger Lily, and the beloved Tinker Bell, are brought to life like never before.
Peter Pan is packed with a lush array of colorful illustrations and interactive removable features, including a detailed map of Neverland, a croc o'clock with hands you can rotate to tell time, Peters shadow, and more. Beautiful and captivating, filled with breathtaking artwork, this stunning book is sure to become a treasured keepsake for fans of all ages.
$39.99Add to basket ›