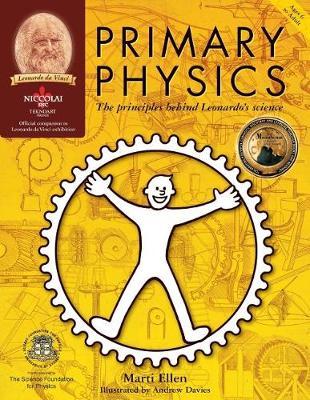 Moonbeam Children’s Book Awards 2007 Bronze Medal: Activity Book - Educational, Science, History For ages 6 and up In order to appreciate the genius of Leonardo Davinci’s science, it is important to study the building blocks which he used to come up with his extraordinary ideas. Leonardo made extensive studies of the components that make up machines. He did this in order to understand the principles by which they worked. His interest was beyond the particular machine that did this or that function. His focus was on understanding what he called the elements of machines . Today we call these elements simple machines . Another physics principle that Leonardo incorporated was an understanding of energy and its effects. The storing and releasing of energy is a common theme in many of his machines, e.g. winches, springs, catapults, etc. He also incorporated a knowledge of forces: his plans for flying machines took account of gravitational forces; and in his file cutter machine, the heavy hammer is lifted by gears and is allowed to drop by gravitational force in order to make a cut. Frictional forces are lessened by the use of ball bearings, as in the machine for changing a theatrical stage, or are increased as in the drawing compass that has to have increased friction between the two legs in order to remain open with a constant radius. Leonardo also understood the properties of mass and the centre of mass (centre of gravity). He used weights and counter weights in numerous machines and he used an understanding of density and compressibility of air as the underlying principle of his aerial screw (a precursor to the helicopter). The lessons in this book will give you a hands-on understanding of these physics principles. Step by step, you will recognize what Leonardo did and why. At the end of the book, you can make working models of some of Leonardo’s machines. And you will discover that the everyday events of our lives are operating under the laws of physics.