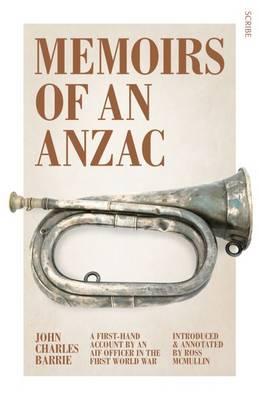 Against his mother’s wishes, John Charles Barrie joined the Australian army in 1909. Five years later, he was on his way to Egypt as an officer with the Australian Imperial Force. He survived the war to write his memoirs, which were kept by his family for 80 years.
Made public for the first time, this book gives first-hand accounts of Barrie’s wounding at Gallipoli on that fateful first Anzac Day, his recuperation in England, and the friendships he made there. It chronicles his escape from rehab so that he could return to the war in France, and his fighting for days on end, waist-deep in mud in the trenches.
Memoirs of an Anzac tells of the horrors of war, but it is also lightened with the good humour that resulted from thousands of young Australian men being thrown together in dire circumstances. This is not a history textbook, nor is it a series of diary notes and letters - it is a gut-wrenching, heart-warming true story that will move you.
$32.99Add to basket ›

END_OF_DOCUMENT_TOKEN_TO_BE_REPLACED

Wings Of A Dove: Music Of Serenity And Peace

Elegy: Music Of A New Dawn From the Shadows of World War 1