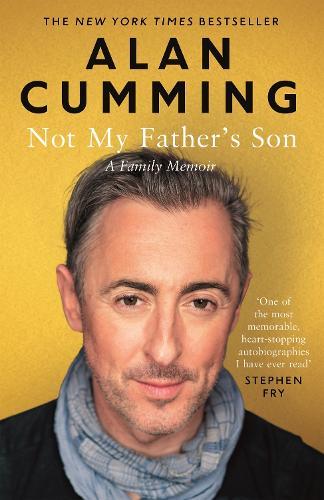 I learned something about myself that night. When I get really shocking news, my entire body tries to get the hell away as quickly as possible. The repercussions of this bombshell would reverberate in my life for a long time to come.
A beloved star of stage and screen, Alan Cumming’s life and career have been shaped by a complex and dark family past - full of troubled memories, kept buried away. But then an unexpected phone call from his long-estranged father brought the pain of the past hurtling back into the present, and unravelled everything he thought he knew about himself.
Not My Father’s Son is the story of his journey of discovery, both a memoir of his childhood in Scotland, and an investigation into his family history which would change him forever.

Alan Cumming grew up on the east coast of Scotland and has become a respected and popular actor on both the stage (Cabaret, Macbeth) and screen (Circle of Friends, The Good Wife). Although his career is interwoven into the story (there are a few humorous anecdotes concerning the spitting habit of Patti Smith and the author’s obsession with the Eurovision song contest) the book is ultimately, as indicated in the subtitle, a family memoir which is told with great honesty and insight. Cleverly structured, I would have to agree with the growing number of reviewers that liken this to a thriller – it is gripping, page-turning stuff.

One of the most notable things about this book is how you go through the experiences with the author. Cumming is able to recall physical and emotional circumstances with such clarity and detail that you really do feel you are sitting alongside him as each revelation occurs. He is a charming and engaging personality who thoughtfully weaves together the past and present, alongside a number of personal photos, all contributing to the sense that the author is sharing the story with you, rather than merely retelling it. At times funny, at other times very sad, this memoir is ultimately moving and inspiring.