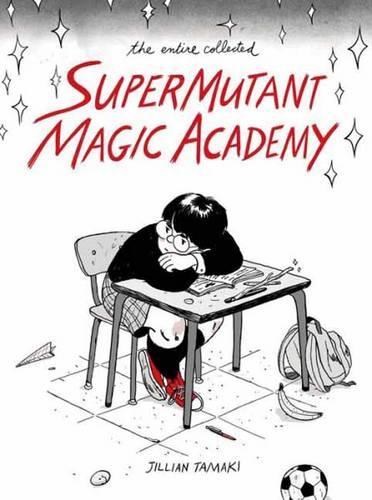 New York Times and New Yorker illustrator Jillian Tamaki is best known for co-creating the award-winning young adult graphic novels Skim and This One Summer - moody and atmospheric bestsellers. SuperMutant Magic Academy, which Jillian has been serializing online for the past four years, paints a teenaged world filled with just as much ennui and uncertainty, but also with a sharp dose of humor and irreverence.
Jillian deftly plays superhero and high school Hollywood tropes against what adolescence is really like: the SuperMutant Magic Academy is a prep-school for mutants and witches but their paranormal abilities take a back seat to everyday teen concerns.
Science experiments go awry, bake sales are upstaged, and the new kid at school is a cat who will determine the course of human destiny. In one strip, lizard-headed Trixie frets about her non-existent modeling career; in another the immortal Everlasting Boy tries to escape this mortal coil to no avail. Throughout it all, closeted Marsha obsesses about her unrequited crushee, the cat-eared Wendy. Whether the magic is mundane or miraculous, Jillian’s jokes are precise and devastating.
SuperMutant Magic Academy has won two Ignatz Awards. This volume combines the most popular content from the webcomic with a selection of all-new, never-before-seen strips that conclude Jillian’s account of life at the Academy.
$36.99Add to basket ›