Tune In: The Beatles: All These Years 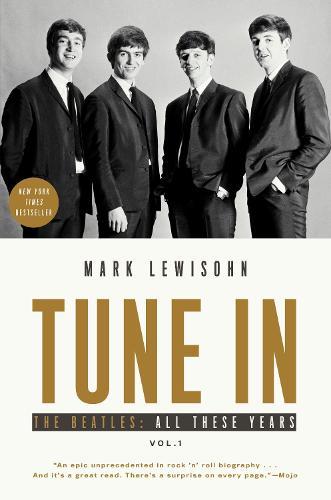 Tune In: The Beatles: All These Years

Now in paperback, Tune In is the New York Times bestseller by the world’s leading Beatles authority - the first volume in a groundbreaking trilogy about the band that revolutionized music. The Beatles have been in our lives for half a century and surely always will be. Still, somehow, their music excites, their influence resonates, their fame sustains. New generations find and love them, and while many other great artists come and go, the Beatles are beyond eclipse. So … who really were these people, and just how did it all happen? ‘The Beatles story’ is everywhere. Told wrong from early on, rehashed in every possible way and routinely robbed of its context, this is a phenomenon in urgent need of a bright new approach. In his series All These Years, Mark Lewisohn - the world-recognized Beatles historian - presses the Refresh button to relate the entire story as it’s never been told or known before. Here is a full and accurate biography at last. It is certain to become the lasting word. Tune In is book one of three, exploring and explaining a period that is by very definition lesser-known: the formative pre-fame years, the teenage years, the Liverpool and Hamburg years - in many ways the most absorbing and incredible period of them all. The Beatles come together here in all their originality, attitude, style, speed, charisma, appeal, daring and honesty, the tools with which they’re about to reshape the world. It’s the Beatles in their own time, an amazing story of the ultimate rock band, a focused and colorful telling that builds and builds to leave four sharp lads from Liverpool on the very brink of a whole new kind of fame. Using impeccable research and resources, Tune In is a magisterial work, an independent biography that combines energy, clarity, objectivity, authority and insight. The text is anti-myth, tight and commanding - just like the Beatles themselves. Here is the Beatles story as it really was. Throw away what you think you know and start afresh.