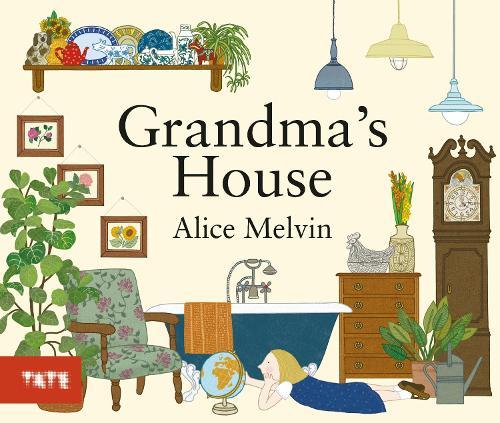 Often, after school, Sally goes to her grandmother’s house where everything is different, but always the same. She puts her coat on the hook in the hall, pours a glass of milk for herself in the kitchen and tries to reach the biscuit tin on the highest shelf in the pantry. But where is Grandma?
Children will love exploring the rooms in Grandma’s House, peering through its cut-out pages from one room to the next and journeying high up into the fold-out attic in search of Sally’s grandma.
Highly detailed and intricately illustrated in Alice Melvin’s trademark style, Grandma’s House is evidence of one of Britain’s shining stars of illustration going from strength to strength.

Alice Melvin’s previous book, the highly acclaimed and bestselling The High Street, was a charming evocation of a more genteel, less hurried time when shopkeepers displayed their wares with pride and careful presentation. With her new book, Melvin revisits her own grandmother’s house with some creative licence and obviously great affection. We follow a young girl as she pops into her grandmother’s home for a visit and, as she comfortably follows her routine, also keeps an eye out for grandma: where is she? Flaps and windows reveal snippets of other rooms and the possibility of grandma’s presence.

Every room is a pleasurable and welcoming depiction of a much loved home. As the young visitor goes in search of her grandparent you feel this is a sanctuary that has nurtured a family over many years. Melvin’s style is precise and measured; the colours are rich and tasteful. Here is a world that cocoons the reader in the sure knowledge that everything is as it should be, even if grandma is proving a little elusive. Grandma’s House pays homage to the precious bond that families share. Go ahead and share it with your family, you won’t be disappointed. For ages 3 and up.

Alexa Dretzke is a Children’s & YA Book Specialist at Readings Hawthorn.

I’ll Always Be Older Than You

A Trip to the Beach

END_OF_DOCUMENT_TOKEN_TO_BE_REPLACED

How to Hide a Lion from Grandma

My Granny Is a Pirate