The Days of Surprise 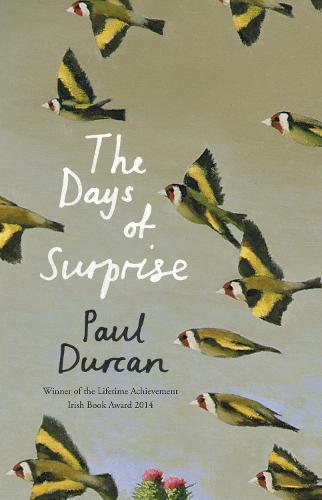 The Days of Surprise

WINNER OF THE LIFETIME ACHIEVEMENT IRISH BOOK AWARD 2014 Paul Durcan never imagined he would be clasped by a woman again, but life is full of surprises! After all, would it surprise you to learn that at the US Ambassador’s Residence in Dublin his libido almost destroyed the Peace Process? There is a new Pope, too, a ‘man of constant surprise’, although in St Peter’s Square Durcan encounters a monk wholly lacking in the Holy Spirit. Elsewhere he muses upon the ‘pre-crucifixion scenario’ of being prepared for surgery, the gift of a malacca cane, the joy of retail therapy, the horror that is wheel-clamping, the ‘starry mystique’ of the weather forecaster Jean Byrne, suicide, bird-watching, stammering, art, Mayo, New York City, New Zealand, murder in Syria and the commemoration of 1916. Perhaps the greatest surprise is the voice of the late Seamus Heaney coming down his chimney- ‘Are you all right down there, Poet Durcan?’ The Days of Surprise is proof that the great poet of contemporary Ireland is in fine fettle.