Redeemed Unredeemable: When America’s Most Notorious Criminals Came Face to Face with God 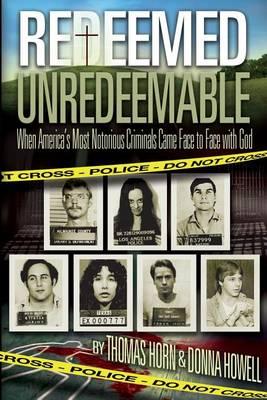 Redeemed Unredeemable: When America’s Most Notorious Criminals Came Face to Face with God

Jesus said that redemptioneternal salvationis available to everyone. No one is beyond His reach; no one falls outside the boundaries of His willingness to forgive. Anyone who calls on Him will be saved, He says. But, does that really include names like Jeffrey Dahmer, Ted Bundy, Susan Atkins, Charles Tex Watson, Sean Sellers, David Berkowitz, and Karla Faye Tucker? Redeemed Unredeemable: When Americas Most Notorious Criminals Came Face to Face with God features a close look into the lives of infamous members of the Manson Family disciples such as Susan Atkins and Charles Tex Watson, as well as serial killer Ted Bundy, Milwaukee Monster Jeffrey Dahmer, Son of Sam David Berkowitz, Pickaxe Killer Karla Faye Tucker, and parent-killer Sean Sellers.