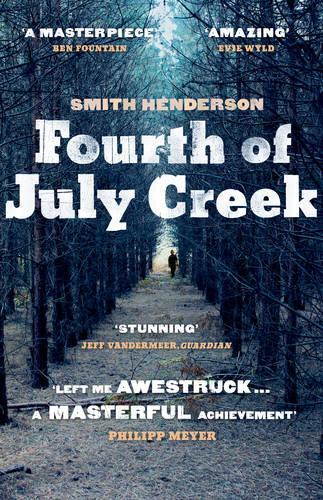 This is a dark and powerful debut novel set in the hardscrabble American heartlands.
‘If I knew for a certain'ty that a man was coming to my house with the conscious design of doing me good, I should run for my life…’ After trying to help Benjamin Pearl, an undernourished, nearly feral eleven-year-old boy living in the Montana wilderness, social worker Pete Snow comes face-to-face with the boy’s profoundly disturbed father, Jeremiah. With courage and caution, Pete slowly earns a measure of trust from this paranoid survivalist itching for a final conflict that will signal the coming End Times. But as Pete’s own family spins out of control, Jeremiah’s activities spark the full-blown interest of the FBI, putting Pete at the centre of a massive manhunt from which no one will emerge unscathed.
In this shattering and iconic novel, Smith Henderson explores the complexities of freedom, community, grace, suspicion and anarchy, brilliantly depicting America’s disquieting and violent contradictions. Fourth of July Creek is an unforgettable, unflinching debut that marks the arrival of a major literary talent.

Sometimes it feels like books find their own way to you. I was drawn to Fourth of July Creek in a pile of proofs at the Carlton office for no particular reason, and it turned out to be an exact fit for my current reading jag (for the record: down-and-out Americana). This book is every which way of cool: cool author with cool name (Smith Henderson!), provenance (Portland via Montana), institutional links (Michener Center for Writers, Austin) and endorsements (Philipp Meyer). But the coolest thing is that it is a seriously good first novel with a plot that’s so involving it’ll spill over into your dreams.

Pete Snow is a social worker in 1980s small-town Montana, helping the children of local families living on the edge. During this work he encounters an array of misfits and renegades: a feral child and his survivalist father; a gang of dope growers; lawmen with a grudge; confused teenagers. Some are seeking his counsel; others are hoping to avoid it. Though he’s trying to keep it all together, things aren’t going well in Pete’s personal life, and during the search to find his missing daughter, the story navigates some dark places of loss, despair and hopelessness. Every seedy dive bar and abandoned house is sharply imagined, rendered with the kind of vivid but economical description that gives the book an incredibly cinematic quality – the dialogue is so character-rich that I was casting the film adaptation as I read. If, like me, you’ve been entranced by recent work from Willy Vlautin, Tupelo Hassman, Poe Ballantine or Russell Banks – books which illuminate the stories of people who fall through the cracks in dark times – then you’re on my jag too, and Henderson’s book is simply a must. If you’re not, well, quite frankly: you should get on it. A great debut.

Alison Huber is a bookseller at Readings Carlton.