Soldier Against The Odds: From Korean War to SAS 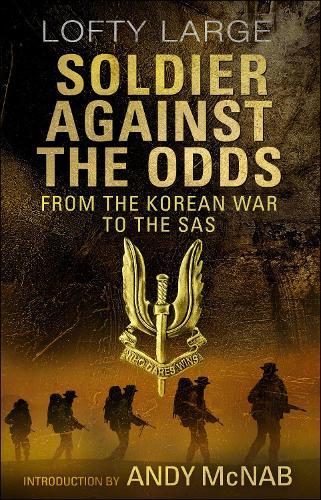 Soldier Against The Odds: From Korean War to SAS

Lofty Large is, quite simply, an SAS legend. He joined the army aged 15 in February 1946 and soon saw service in Germany and Hong Kong. By early 1951 the thundering engines of the Empire Orwell were transporting him and hundreds of others towards their first taste of war at the sharp end- Korea. He was wounded in action and captured as a prisoner-of-war by the enemy at the battle of the Imjin River. On his release two years later he was declared ‘unfit for further military service’. Lofty Large refused to give up on his military career and defied the odds, passing the SAS selection course and going on to enjoy a long and eventful career with the Special Air Service. With that elite group Lofty served all over the world- in the mind-numbing cold, in the blazing desert heat and in sweat-drenched jungle warfare. He faced minefields , traps and ambushes, as well as bombs, bullets, rockets and napalm. He is the first to admit he also experienced a lot of luck, not the kind which wins money in gambling or business but the kind which means, when the smoke clears, that you are the bastard still standing. In his introduction to SAS Soldier Against The Odds, Andy McNab says Lofty was a survivor, ‘but it’s not just about luck. He is too modest to say that it’s also about guts, thinking faster than the enemy and being willing to go further than they will to survive. That takes courage and skill. This book shows that Lofty Large, in winning his legendary SAS status, had more than his share of both those attributes.