Revolution and Counter-Revolution or Germany in 1848 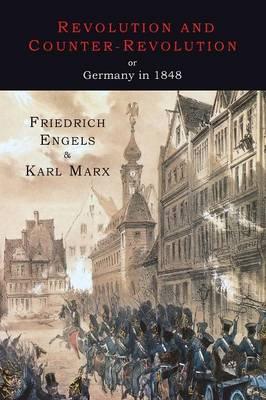 Revolution and Counter-Revolution or Germany in 1848

2014 Reprint of 1896 Edition. Full facsimile of the original edition, not reproduced with Optical Recognition Software. In 1851Marx was asked to write a series of articles on the German Revolution of 1848. These articles were written by Engels at the request of Marx, who was then busy with his economic studies and felt, besides, that he had not yet attained fluency in English. Engels wrote the articles in Manchester, where he was employed, and sent them on to Marx in London to be edited and dispatched to New York. Marx’s youngest daughter, Eleanor Marx Aveling, collected these articles and put them into book form in 1896, with the title Revolution and Counter-Revolution; or, Germany in 1848. Each of the original articles were edited by Aveling and appeared as chapters. The work is an account of what happened in Prussia, Austria and other German states during 1848, describing the impact on both middle-class and working-class aspirations and on the idea of German unification. Chapters include: I. Germany at the Outbreak of the Revolution II. The Prussian State III. The Other German States IV. Austria V. The Vienna Insurrection VI. The Berlin Insurrection VII. The Frankfort National Assembly VIII. Poles, Tschechs, and Germans IX. Panslavism; The Schleswig War X. The Paris Rising; The Frankfort Assembly XI. The Vienna Insurrection XII. The Storming of Vienna: The Betrayal of Vienna XIII. The Prussian Assembly: The National Assembly XIV. The Restoration of Order: Diet and Chamber XV. The Triumph of Prussia XVI. The Assembly and the Governments XVII. Insurrection XVIII. Petty Traders XIX. The Close of the Insurrection XX. The Late Trial at Cologne