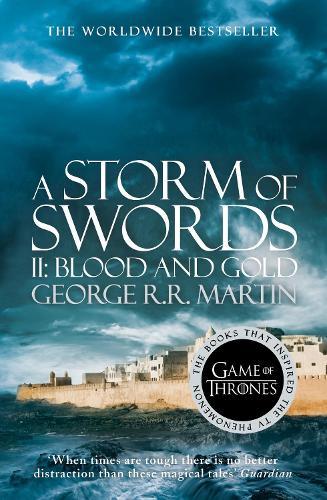 HBO’s hit series A GAME OF THRONES is based on George R R Martin’s internationally bestselling series A SONG OF ICE AND FIRE, the greatest fantasy epic of the modern age. A STORM OF SWORDS: BLOOD AND GOLD is the SECOND part of the third volume in the series. ‘When times are tough there is no better distraction than these magical tales’ Guardian ‘There are two sorts of people. The players and the pieces … Every man’s a piece to start with, and every maid as well. Even some who think they are players’ The Starks are scattered. Robb Stark may be King in the North, but he must bend to the will of an old tyrant if he is to hold his crown. And while his youngest sister has escaped the clutches of the depraved Lannisters, Sansa Stark remains their captive. Meanwhile, across the ocean, the last heir of the Dragon King approaches Westeros with vengeance in her heart.

A Song of Ice and Fire (Game of Thrones books)

END_OF_DOCUMENT_TOKEN_TO_BE_REPLACED

A Clash of Kings

A Feast for Crows (Reissue)

A Dance With Dragons

A Game of Thrones

A Clash of Kings