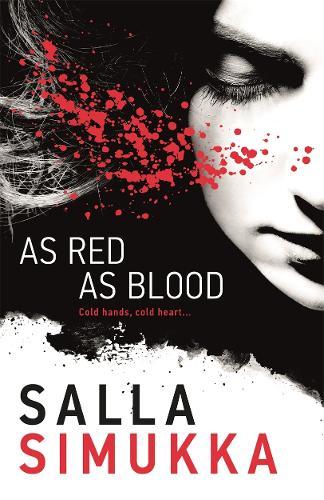 Seventeen-year-old Lumikki Andersson is hardly your average teenager. She lives by herself in the city of Tampere, Finland, and has a firm rule to mind nobody’s business but her own. But that rule is put to the test when she happens upon five hundred washed euro notes hanging up to dry in her school’s darkroom, and it is shattered once Lumikki realises who owns them.
Caught in an increasingly tangled web of deception, corruption and danger, Lumikki finds herself navigating Tampere’s dark underbelly in her quest to expose its shocking connection to the international drugs trade. Lumikki is smart, but is she smarter than a master criminal? Can she bring down the infamous ‘Polar Bear’ - or will she become another one of his victims?
The first part of a thrilling new Nordic crime series, As Red As Blood will have you on the edge of your seat until the last page is turned …and then some.

Lumikki Andersson is not your typical teenager. She lives on her own in a small town in Finland and likes it that way. She doesn’t trust people and doesn’t like to get involved in anyone else’s business. But when she discovers thousands of Euros hanging in her school’s darkroom, she finds herself reluctantly becoming tangled in a dangerous web of crime, corruption and underworld figures, where the price could very well be her life.

This is a fast-paced, beautifully written contemporary thriller that brings to mind the current wave of Scandinavian crime. The author has already won the prestigious Topelius Prize in Finland for this novel, and it’s a must-read for crime- and thriller-lovers. Luckily it’s the first in a trilogy, because I can’t wait to get my hands on the next instalment.

END_OF_DOCUMENT_TOKEN_TO_BE_REPLACED

All That Impossible Space

All Eyes on Us