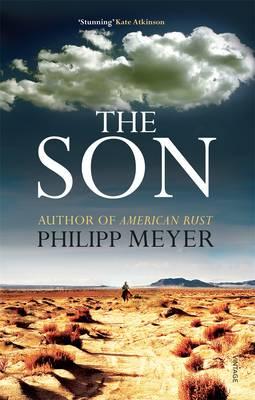 Eli McCullough was born in 1836, the year that the Republic of Texas was declared an independent state. He was the first child of this new republic. Eight years later he and his brother are kidnapped. They are left with nothing, barely their lives, whilst Eli watches his sister being raped and killed. Slowly he learns the ways and life of the Comanches as they battle to survive themselves against the incursions of the white settlers. But his progress within the tribe is matched by the tribe’s own perilous journey, as an epidemic endangers their future. Eli is forced to leave the tribe and pursue his life elsewhere. He falls in love, has children and becomes a Ranger working for the Government, but finds it hard to break his Comanche memories and ways. He lives to be 100 and tells his remarkable story.
Eli’s son Peter McCullough endures the First World War and several Mexican attacks. His diaries tell of momentous and dangerous times as he tries to maintain the dynasty begun by his father, now named the Colonel.
At the age of eighty-six Jeanne Anne McCullough is the fifth richest woman in Texas, She has had a fall and is perilously close to death. She goes in and out of consciousness and tells her own history; battling to keep the family alive; battling to prevent the large-scale acquisitive oil companies from buying her land; battling to hold on to her largesse and her legacy.
Three stories of one family combine to produce nothing less than a standout epic of and for our time.

If John Wayne were still alive, he’d be salivating. For Phillipp Meyer’s second raid on the American heart is the story of Texas, where strength, men, dust, violence, gunpowder, cattle and oil come together to shine in a blood-soaked cowboy state.

Meyer’s first novel, American Rust, took place in a dilapidated small town. In stark contrast The Son is a broad sweeping epic that traverses multiple generations, with enough horror and violence to rival Cormac McCarthy’s Blood Meridian. But this is not simply a tale of war and incoherent brutality; it’s about what it is to be American.

The McCulloughs are a powerful Texan dynasty, and each chapter is narrated by a different family member, decades apart. Their patriarch is one of the most formidable men in Texas, known as The Colonel. He was kidnapped by Comanche Indians as a boy, and reared on the plains of war and battle cries. Eli is renamed Tiehteti by the Indians, and eventually lives to be 100 years old. His years spent with the Comanche are narrated until the 1870s, where the story shifts into the hands of his son Peter. Told through journal entries from 1915-17, Peter is haunted by the murder of a neighbouring Mexican family. The third voice is Jeannie, the Colonel’s great-granddaughter, who wanders through her memories from the floor of the family mansion after suffering a fall in 2012.

You can almost feel your own scalp being ripped off by the complexity of such a long-sweeping narrative, but Meyer kindly includes a genealogy for us to return to. After all, it’s family he is concerned with, and the vast differences between siblings and the choices (or lack of) available to them. Meyer dissects this idea through Texas – the classic American son – where ‘the strong must be encouraged, and the weak allowed to perish’.