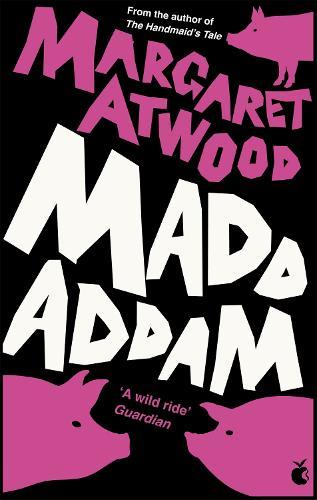 A man-made plague has swept the earth, but a small group survives, along with the green-eyed Crakers - a gentle species bio-engineered to replace humans. Toby, onetime member of the God’s Gardeners and expert in mushrooms and bees, is still in love with street-smart Zeb, who has an interesting past. The Crakers' reluctant prophet, Snowman-the-Jimmy, is hallucinating; Amanda is in shock from a Painballer assault; and Ivory Bill yearns for the provocative Swift Fox, who is flirting with Zeb. Meanwhile, giant Pigoons and malevolent Painballers threaten to attack.
Told with wit, dizzying imagination, and dark humour, Booker Prize-winning Margaret Atwood’s unpredictable, chilling and hilarious MaddAddam takes us further into a challenging dystopian world - a moving and dramatic conclusion to the internationally celebrated trilogy that began with Oryx and Crake and The Year of the Flood.

Ten years after the release of Oryx and Crake, the final instalment of Margaret Atwood’s dystopian trilogy is here, a slow-burning and wholly immersive, chilling delight. Once again we’re thrown into the wreckage of the world post-‘flood’ (please read: plague that destroys the majority of humans) and here the story unfolds in the kind of exciting mash-up of modes you’d expect from Atwood, with storytelling and myth-making at the centre.

Much of the novel is narrated by Toby, a recurring character, who now finds herself acting as a leader of sorts to a small group of survivors including MaddAddamites, God’s Gardeners and Crakers. (If you’re confused, now’s a good time to recommend you read the rest of the series first.) Also following in the trend of the previous two books, we’re treated to the action-fuelled history of Zeb, complete with dead bodies, a lost brother and a bear. All the while, Atwood tucks additional layers into the world she’s constructed over the past years, applying new colours, shapes and lines, and the result is immensely satisfying. While MaddAddam feels less immediate than the previous books – it’s more experimental in its structure – Atwood’s prose is as wry and accomplished as ever, and very funny; I particularly loved the interactions between Toby and the Crakers.

In some ways, this is my favourite book in the series. Unlike the first two, which largely deal with the immediate repercussions of the apocalypse, MaddAddam offers a tiny glimpse of what this ‘brave new world’ will be like. Living in a time where it’s now possible to download and print a gun, it was all too easy to picture Atwood’s imagination turned outwards. Her vision, which stems from existing science, is believable and chilling, but there is also hope, and what’s wonderful is that this is believable too.

END_OF_DOCUMENT_TOKEN_TO_BE_REPLACED

Bringing together characters from Oryx and Crake and The Year of the Flood, this thrilling conclusion to Atwood's dystopian trilogy confirms the ultimate endurance of humanity, community, and love.

The Year of the Flood

An epic of biblical proportions, The Year of the Flood is a feast of imagination and a journey to the end of the world.

The outrageous imagination of Margaret Atwood has never been better. Dark, witty, scary and very credible, this is a mystery, an adventure story, a page-turner and a brilliant novel. Shortlisted for the Man Booker Prize and the...

The Book of Koli (The Rampart Trilogy, Book 1)