Bullied Kids Speak Out: We Survived–How You Can Too 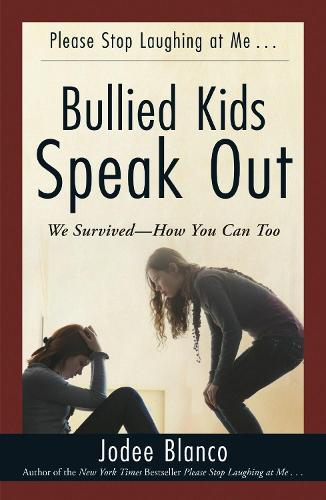 Bullied Kids Speak Out: We Survived–How You Can Too

True stories from New York Times bestselling author Jodee Blanco’s tours Have you ever felt alone, as if no one understands what you’re going through, and that no matter how hard you try, you’re scared things may never get better? Do you wish your classmates would give you a break? I felt that way often in school. I was bullied and excluded for the same reason maybe you or someone you know has been–simply for being different. There were days when all I wanted was to stay in my room. Back then, I would have given almost anything to meet the kids you’re going to meet here. Autumn dreaded recess. Joshua was afraid to trust anyone at home or at school. Taylor had lots of friends until her BFF turned them all against her. Gabe’s online gaming world was turned upside down when other players started humiliating him. A teacher was bullying Brianna. Eric’s Asperger’s made him the butt of cruel jokes. The cool crowd beat up Tiffany and videotaped it for YouTube. Zach got punched and stomped on because of his weight. Trinity felt invisible. Aamina was harassed because of her family’s religious beliefs. Riley had to live with the soul-crushing weight of mental illness as well as the other students who jeered at her plight. These are some of the brave teens who will be talking to you in this book. They–and others they inspired–found the courage to stand up to their bullies and reclaim their lives, and you’ll hear exactly how they did it. You’re not alone anymore.