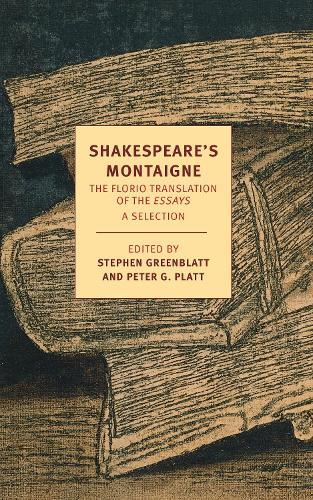 An NYRB Classics Original An NYRB Classics Original Shakespeare, Nietzsche once wrote, was Montaigne’s best reader. It is a typically brilliant Nietzschean insight, capturing the intimate relationship between the ever-changing record of the mutable self constituted by Montaigne’s Essays and Shakespeare’s kaleidoscopic register of human character. For all that, how much Shakespeare actually read Montaigne remains a matter of uncertainty and debate to this day. That he read him there is no doubt. Passages from Montaigne are evidently reworked in both King Lear and The Tempest, and there are possible echoes elsewhere in the plays. But however closely Shakespeare himself may have pored over the Essays, he lived in a milieu in which Montaigne was widely known, oft cited, and both disputed and respected. This in turn was thanks to the inspired and dazzling translation of his work by a man who was a fascinating polymath, man-about-town, and master of language himself, John Florio. Shakespeare’s Montaigne offers modern readers a new, adroitly modernized edition of Florio’s translation of the Essays, a still-resonant reading of Montaigne that is also a masterpiece of English prose. Florio’s translation, like Sir Robert Burton’s Anatomy of Melancholy and the works of Sir Thomas Browne, is notable not only for its stylistic range and felicity and the deep and lingering music of many passages, but also for having helped to invent the English language as we know it today, supplying it, very much as Shakespeare also did, with new words and enduring turns of phrase. Stephen Greenblatt’s introduction also explores the echoes and significant tensions between Shakespeare’s and Montaigne’s world visions, while Peter Platt introduces readers to the life and times of John Florio. Altogether, this book provides a remarkable new experience of not just two but three great writers who ushered in the modern world.