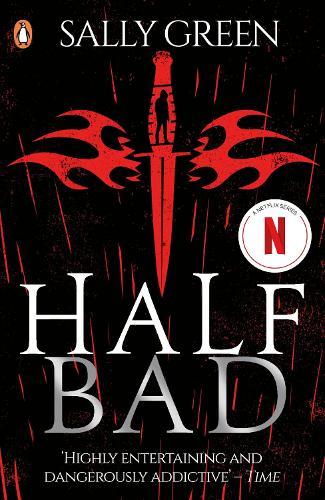 Half Bad by Sally Green is a breathtaking debut novel about one boy’s struggle for survival in a hidden society of witches. You can’t read, can’t write, but you heal fast, even for a witch. You get sick if you stay indoors after dark. You hate White Witches but love Annalise, who is one. You’ve been kept in a cage since you were fourteen. All you’ve got to do is escape and find Mercury, the Black Witch who eats boys. And do that before your seventeenth birthday. Easy.
Sally Green lives in north-west England. She has had jobs (paid and unpaid) and even a profession but at last has found the time to write down the stories she used to only be able to daydream about. She likes to read, walk in the country and would like to drink less coffee. Half Bad is her first novel.

I can’t wait to put vampires behind us, so the moment I was told I was reviewing a book about witches I was super excited. Set in contemporary England, Half Bad tells the story of Nathan, a 15-year-old boy who is half White witch (good), and half Black witch (evil). In a world where witches live among humans, being a half blood sees Nathan ostracised for simply being born the way he is. His mother is dead, and his father is a murderer – one of the most notorious Black witches alive.

When the White Council sends Nathan to be guarded by a woman who keeps him locked in a cage and trained like a soldier, Nathan realises he is being used as bait to lure his powerful, evil father. Nathan needs to escape before he turns 16; on this birthday, your parents present you with three gifts, allowing you to become a full witch.

Ah, this was fantastic! With a brilliantly captivating plot and a protagonist you actually feel for, Half Bad surprised me for being so well written and so wonderfully creative. Throw down your Twilight and Hunger Games – this is where fantasy gets great.