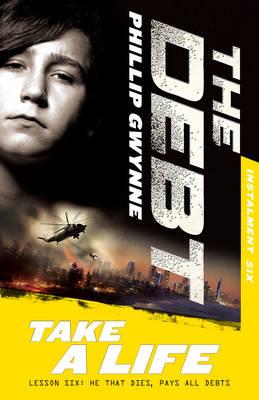 I had never been so utterly, terribly alone. Who could I talk to? My parents? Sure. I wasn’t even sure who they were anymore. Who could I ask whether killing another human being is ever justified? Dom’s almost there. It’s the sixth instalment and the end is in sight, but he’s about to face the biggest hurdle. The Debt wants proof. Proof that Dom has the mettle to become one of them. Proof he can kill. Dom is desperate to be rid of this debt but at what cost? Could he put a friend out of their misery? Or defend himself to the bitter end? And if he does flush out who is behind this monstrous organisation, is he ready for the truth? This time it is not just a life at stake, it’s humanity. Dom’s humanity. And if Dom crosses the line, is there any coming back? The chilling conclusion to the edge-of-the-seat action thriller from a masterful storyteller.

END_OF_DOCUMENT_TOKEN_TO_BE_REPLACED

Book two of a high-octane thriller series. Dom has five more Herculean tasks to perform...or lose a pound of flesh. In this instalment Dom has to turn the power off during Earth Hour--for the entire Gold Coast.

Book three of a high-octane thriller series. Dom has four more Herculean tasks to perform... or lose a pound of flesh. In this instalment he has to find a valuable and mysterious piece of technology.

The Debt was the worst thing to have come into my life. It had almost killed me about a dozen times in a dozen different ways. But here I was wanting, willing, it to contact me. To give me the next instalment.After Rome, Dom has...