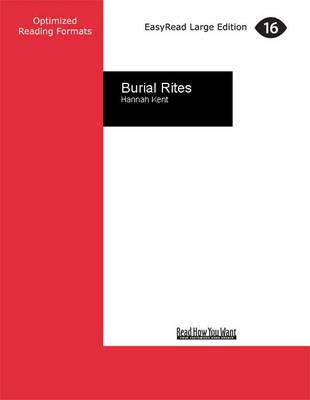 In northern Iceland, 1829, Agnes Magnusdottir is condemned to death for her part in the brutal murder of two men. Agnes is sent to wait out the time leading to her execution on the farm of District Officer Jon Jonsson, his wife and their two daughters. Horrified to have a convicted murderess in their midst, the family avoids speaking with Agnes. Only Toti, the young assistant reverend appointed as Agnes’s spiritual guardian, is compelled to try to understand her, as he attempts to salvage her soul. As the summer months fall away to winter and the hardships of rural life force the household to work side by side, Agnes’s ill-fated tale of longing and betrayal begins to emerge. And as the days to her execution draw closer, the question burns: did she or didn’t she? Based on a true story, Burial Rites is a deeply moving novel about personal freedom: who we are seen to be versus who we believe ourselves to be, and the ways in which we will risk everything for love. In beautiful, cut-glass prose, Hannah Kent portrays Iceland’s formidable landscape, where every day is a battle for survival, and asks, how can one woman hope to endure when her life depends upon the stories told by others?