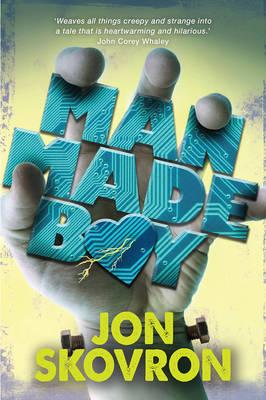 Sixteen-year-old Boy’s never left home. When you’re the son of Frankenstein’s monster and the Bride, it’s tough to go out in public, unless you want to draw the attention of a torch-wielding mob. And since Boy and his family live in a secret enclave of monsters hidden under Times Square, it’s important they maintain a low profile.
Boy’s only interactions with the world are through the internet, where he’s a hacker extraordinaire who can hide his hulking body and stitched-together face behind a layer of code. When conflict erupts at home, Boy runs away and embarks on a cross-country road trip with the granddaughters of Jekyll and Hyde, who introduce him to malls and diners, love and heartbreak. But no matter how far Boy runs, he can’t escape his demons - both literal and figurative - until he faces his family once more.
This hilarious, romantic, and wildly imaginative tale redefines what it means to be a monster - and a man.

Boy could be a typical seventeen-year-old geek. He’s happiest holed up in his room, an ingenious hacker, creating code or chatting to his online buddies at all hours. Yet Boy isn’t typical. He’s the son of Frankenstein’s Monster, confined underground in a secret haven for monsters, the internet his only link to the outside world.

When Boy’s dad reveals the secret plan for his future, Boy’s anger and confusion spills into rage. Refusing to accept the life envisaged for him, Boy rebels, running away to live in the city and subsequently embarking on an exciting cross-country adventure with Jekyll and Hyde’s granddaughters. But danger pursues them relentlessly until few options are left.

Boy is a reluctant hero; wracked with doubt and guilt for the devastation he’s unwittingly unleashed, Boy courageously faces up to his responsibility and family.

This is one of the best books I’ve read all year, hilariously funny and incredibly inventive. The author has drawn inspiration from a number of sources including mythological creatures, magically weaving these original threads into a new and marvellous story. But at the heart of this paranormal quest lies a quintessential coming-of-age tale. Highly recommended for ages 14 and up.