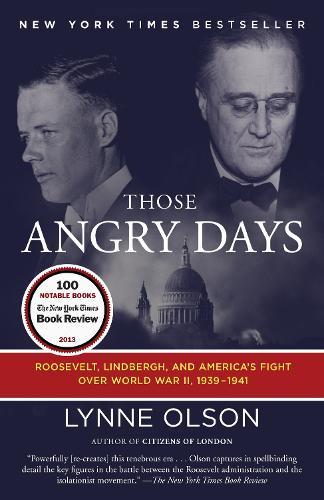 NEW YORK TIMES BESTSELLER From the acclaimed author of Citizens of London comes the definitive account of the debate over American intervention in World War II a bitter, sometimes violent clash of personalities and ideas that divided the nation and ultimately determined the fate of the free world. t the center of this controversy stood the two most famous men in America- President Franklin D. Roosevelt, who championed the interventionist cause, and aviator Charles Lindbergh, who as unofficial leader and spokesman for America’s isolationists emerged as the president’s most formidable adversary. Their contest of wills personified the divisions within the country at large, and Lynne Olson makes masterly use of their dramatic personal stories to create a poignant and riveting narrative. While FDR, buffeted by political pressures on all sides, struggled to marshal public support for aid to Winston Churchill’s Britain, Lindbergh saw his heroic reputation besmirched and his marriage thrown into turmoil by allegations that he was a Nazi sympathizer. panning the years 1939 to 1941, Those Angry Days vividly re-creates the rancorous internal squabbles that