World of the Medieval Knight 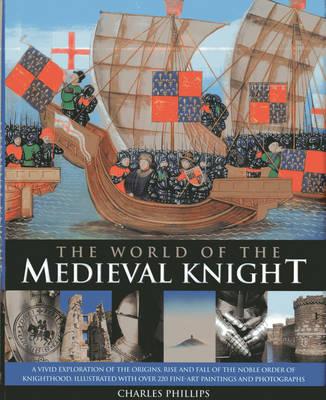 World of the Medieval Knight

This is a vivid exploration of the origins, rise and fall of the noble order of knighthood, illustrated with over 220 fine art paintings and photographs. It covers every aspect of the role of knights in feudal Europe: their nobility, social status, military exploits, and responsibilities and privileges. It gives a detailed insight into the life of a knight, the importance of oaths and alliances, the fiefdoms and castles won or granted, the rigorous training, and the formation of knightly orders and the code of chivalry. It offers fascinating detail on what the knight wore when at war and at the tournament, together with the weapons used, and the effectiveness of fighting tactics. It includes special sections that cover the most revered knights of the time, including the historical figures of Charlemagne, Richard the Lionheart and Edward the Black Prince. This book travels back in time to the intriguing middle ages, one of the most violent and turbulent periods in European history, to explore the world of a medieval knight. Delving into the origins of knighthood, the book reveals the long and arduous training and education that noble-born sons undertook. It describes the demands of chivalry and the strength of character needed to protect the vulnerable, alongside the obligations and rewards expected and received. The world of the castle is examined, showing the knight at home, his duties to administer the King’s law and maintain peace, and how he spent his leisure time pursuing the noble arts of courtly love, hawking, jousting, hunting and music. This book enlivens the world of the chivalric knight, portraying these legendary heroes in vivid detail.