A Story of Grief: Penguin Special 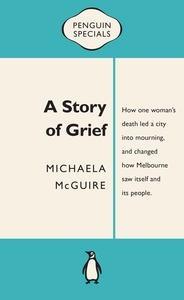 A Story of Grief: Penguin Special

When Jill Meagher went missing and was then found murdered in 2012, the city of Melbourne was shaken to the core. Emotional responses ranged from grief to guilt to rage to defensiveness, but no one was left untouched.
The media coverage was unrelenting and overwhelming, constantly updating readers and viewers on the latest awful details, and friends and neighbours couldn’t help but discuss it. Here acclaimed writer Michaela McGuire eloquently describes how, as the story continued to unfold, it wove itself through the fabric of the city. A Story of Grief is a deeply moving examination of the act of grief and how the death of someone we don’t know personally can still consume us.
$9.99Add to basket ›

END_OF_DOCUMENT_TOKEN_TO_BE_REPLACED

Mistakes Were Made: Penguin Special

Betrayal in Paris: How the Treaty of Versailles Led to China’s Long Revolution: Penguin Specials

Beyond the Boom: A Lowy Institute Paper: Penguin Special

Getting Stuck in For Shanghai: Putting the Kibosh on the Kaiser from theBund: The British at Shanghai and the Great War: Penguin Specials