Carry a Big Stick: A funny, fearless life of friendship, laughter and MS 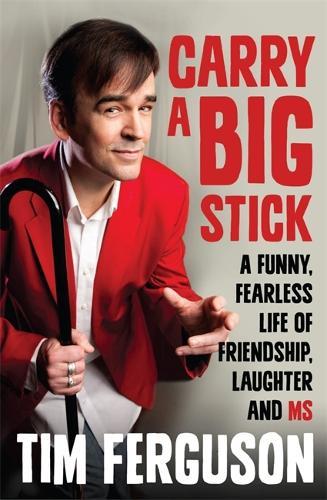 Carry a Big Stick: A funny, fearless life of friendship, laughter and MS

Tim Ferguson was a star of the international comedy circuit. Along with Paul McDermott and Richard Fidler he was part of the edgy, provocative and very funny Doug Anthony Allstars (DAAS). In 1994 they were at the height of their powers, performing in a season at the Criterion Theatre on Piccadilly Circus.
The three mates, who began busking on the streets of Canberra a decade earlier, had achieved their ambition to become the self-styled rock stars of comedy. Then, all of a sudden, Tim woke up one morning and his whole left side wouldn’t work. He’d had a lurking suspicion that something was wrong and after more episodes he went to a doctor thinking he’d be told to change his diet and get more sleep. It wasn’t so simple. An eventual diagnosis of multiple sclerosis (MS) meant an end to the frenetic, high-energy life he was living.

CARRY A BIG STICK is a chance for Tim to tell his story. He wants to make people laugh but also give inspiration to all the people doing it hard. A lot of people keep MS to themselves because it’s invisible. In Tim’s case, he has the stick. ‘It’s such a visible sign that something’s happened; it’s just easier if people know.’
CARRY A BIG STICK meanders through Tim’s life, and explains how the boy who went to nine schools in 13 years got used to saying, ‘Hi, I’m the new kid’. It will detail his ambitions to become an actor and how the Doug Anthony Allstars were born and went on to become what Rolling Stone called ‘The 3 amigos from hell’. Diagnosis changed a lot of things but Tim s quick wit and sense of humour weren t affected. This inspiring memoir shows us that you can laugh in the face of adversity.
$35.00Add to basket ›