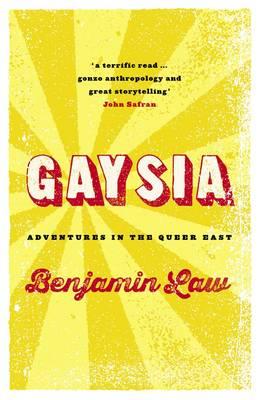 Benjamin Law considers himself pretty lucky to live in Australia: he can hold his boyfriend’s hand in public and lobby his politicians to recognise same-sex marriage. As the child of migrants, though, he also wonders how different life might have been had he grown up elsewhere.
So off he sets to meet his fellow Gaysians. Law takes his investigative duties seriously, baring all in Balinese nudist resorts and taking Indian yoga classes designed to cure his homosexuality. The characters he meets - from Tokyo’s celebrity drag queens to HIV-positive Burmese sex workers, from Malaysian ex-gay Christian fundamentalists to Thai ladyboy beauty contestants - all teach him something new about being queer in Asia.
At once hilarious and moving, Gaysia traces a fascinating quest by a leading Australian writer.

Benjamin Law is making a name for himself. I was reading Gaysia on my tram ride home, learning about Homolasians, Bi-Mese, Laosbians and Shandykes when a fellow passenger spotted the cover and interrupted my reading with a small mostly one-sided conversation about how much of a fan he was.

Normally having my own personal opinions validated by strangers leaves me with a smile on my face and a bounce in my step (nothing like having someone tell you you’re right!) but this time however, while I appreciated his enthusiasm I couldn’t help but feel annoyed at the distraction.

You see Benjamin Law is a really good writer and Gaysia, a book exploring homosexuality and its reception in Asia is a fantastic book. Benjamin starts his journey in Bali talking to both the (sometimes barley legal) moneyboys and the bulés (cashed up Caucasian Westerners) who hire and/or date them. He travels through China to talk to participants of fake marriages – an interesting phenomenon where gay and lesbian couples marry each other to keep their highly traditional families happy (the other way of keeping your parents happy if you were a gay man would be to marry a straight woman. If you did this, your wife would be a tongqi).

In Myanmar, Benjamin handle with an impressive amount of hardy delicacy the dark humour of the HIV infected. In India, he talks to a swamji who claimed to be able to cure homosexuality though yoga and breathing. Benjamin throws himself into every challenge he’s given, occasionally to the detriment of his own personal health, and recalls it all (including the evangelistic priest in Malaysia who claimed to be able to ‘heal’ the ‘sexually broken’) with warmth, sympathy and humour.

Gaysia ends with a heartwarming revelation on Benjamin’s part that left me (a ‘sexually regular’ person) feeling oddly proud of homosexuality myself.

Dani Solomon once accepted a lift back to 1983 from a mad man in a blue box that was bigger on the inside. Unfortunately while there she accidentally stood on a butterfly and ended up in the wrong trouser leg of time. Now rather than saving the world and rescuing knights in shining armour from dragons like she should be doing, she reads books about them and reviews the ones she likes instead. Secretly she prefers this version of the future - knights in shining armour can be quite tiresome.