The Soviet Occupation of Germany: Hunger, Mass Violence and the Struggle for Peace, 1945-1947 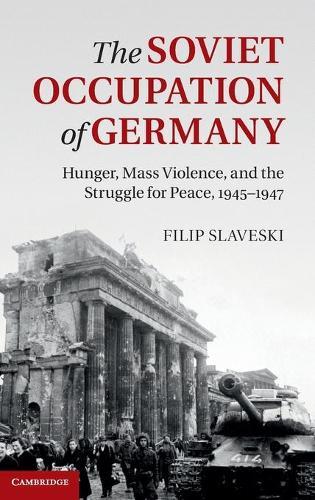 The Soviet Occupation of Germany: Hunger, Mass Violence and the Struggle for Peace, 1945-1947

This is a major account of the Soviet occupation of postwar Germany and the beginning of the Cold War. Dr Filip Slaveski shows how in the immediate aftermath of war the Red Army command struggled to contain the violence of soldiers against German civilians and, at the same time, feed and rebuild the country. This task was then assumed by the Soviet Military Administration in Germany (SVAG) which was established to impose order on this chaos. Its attempt, however, intensified the battle for resources and power among competing occupation organs, especially SVAG and the army, which spilled over from threats and sabotage into fighting and shootouts in the streets. At times, such conflicts threatened to paralyse occupation governance, leaving armed troops, liberated POWs and slave labourers free to roam. SVAG’s successes in reducing the violence and reconstructing eastern Germany were a remarkable achievement in the chaotic aftermath of war.