Stormdancer: The Lotus War Book One 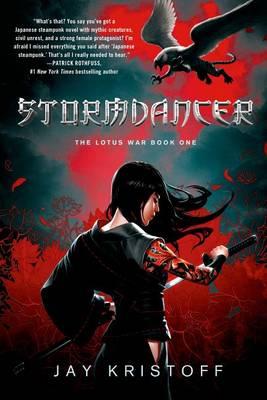 Stormdancer: The Lotus War Book One

What’s that? You say you’ve got a Japanese Steampunk novel with mythic creatures, civil unrest, and a strong female protagonist? I’m afraid I missed everything you said after  Japanese Steampunk.  That’s all I really needed to hear.  – Patrick Rothfuss, #1 New York Times-bestselling author of The Name of the Wind and The Wise Man’s Fear
Stormdancer is the first in the epic new fantasy series The Lotus War, introducing an unforgettable heroine and a stunningly original dystopian steampunk world with a flavor of feudal Japan.
The Shima Imperium verges on the brink of environmental collapse; an island nation once rich in tradition and myth, now decimated by clockwork industrialization and the machine-worshipers of the Lotus Guild. When hunters of Shima’s imperial court are charged by their Shogun to capture a legendary griffin, they fear their lives are over. Any fool knows the beasts have been extinct for more than a century, and the price of failing the Shogun is death. Accompanying her father on the Shogun’s hunt, the girl Yukiko finds herself stranded: a young woman alone in Shima’s last wilderness, with only a furious, crippled griffin for company. Even though she can hear his thoughts, even though she saved his life, all she knows for certain is he’d rather see her dead than help her. But together, the pair will form an indomitable friendship, and rise to challenge the might of an empire.
An intoxicating joyride into steampunklandia with a magical dose of mythology, the supernatural, violence, dystopian themes, and a top-notch brassy heroine who rivals Katniss Everdeen of The Hunger Games.  – Huffington Post
With airships, demons, and lashings of revolutionary swordplay, this chi-fueled vision of a steampunk feudal Japan will blow your split-toed socks off.  – Scott Westerfeld, New York Times-bestselling author of Leviathan
Kristoff is the master of unique and intense plots and huge twists. This book has it all – and a nice little bow to tie it all up with. There are swords, action, friendship, a conspiracy, grief and hope. It’s going on my  Amazing Reads  shelf, and I urge you to pick it up.  – USAToday.com
[A] fast-paced, fantastical adventure…sharp as a Shogun’s sword.  – The LA Times
$31.99Add to basket ›