1835: The Founding of Melbourne & the Conquest of Australia 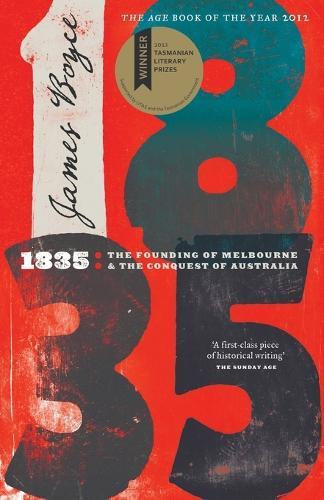 1835: The Founding of Melbourne & the Conquest of Australia

With the founding of Melbourne in 1835, a flood of settlers began spreading out across the Australian continent. In three years more land - and more people - was conquered than in the preceding fifty. In 1835 James Boyce brings this pivotal moment to life. He traces the power plays in Hobart, Sydney and London, and describes the key personalities of Melbourne’s early days. He conjures up the Australian frontier - its complexity, its rawness and the way its legacy is still with us today. And he asks the poignant question largely ignored for 175 years; could it have been different? With his first book, Van Dieman’s Land, Boyce introduced an utterly fresh approach to the nation’s history. ‘In re-imagining Australia’s past.’ Richard Flanagan wrote, ‘it invents a new future,’ 1835 continues this untold story. Shortlisted for the Australian History Prize in the 2012 Prime Minister’s Literary Awards, The History Prize in the 2012 Queensland Literary Awards, and the Non-Fiction Prize in the 2012 Adelaide Festival Awards for Literature, 2012 Victorian Premiers Literary Awards and 2011 WA Premier’s Book Awards. ‘Boyce is a graceful and robust stylist and a fine storyteller and he organises his material beautifully. His book … deserves a wide audience.’ The Sunday Age ‘1835 is a date to be remembered and this is a book to be pondered.’ The Sun-Herald