The Lost Battles: Leonardo, Michelangelo and the Artistic Duel That Defined the Renaissance 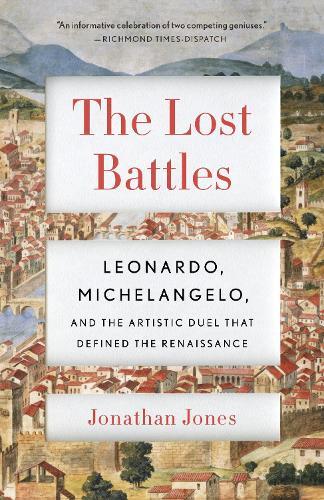 The Lost Battles: Leonardo, Michelangelo and the Artistic Duel That Defined the Renaissance

From one of Britain’s most respected art historians, art critic of The Guardian-the galvanizing story of a sixteenth-century clash of titans, the two greatest minds of the Renaissance, working side by side in the same room in a fierce competition. In 1504, the informal rivalry between two of the most celebrated artists in Florence became a direct contest. Michelangelo was commissioned to paint a scene from the ancient battle of Cascina on a wall of the Palazzo Vecchio-in the same room where Leonardo da Vinci had already been commissioned to paint a scene from another great Florentine victory, the battle of Anghiari. As the paintings progressed, Michelangelo set out to prove that his work, not Leonardo’s, embodied the future of art–but in fact, the influence of both would become visible in the works of subsequent generations of artists. The Lost Battles is a riveting look at one of history’s most resonant exchanges of ideas and offers a whole new understanding of an age and those at its center.