Too High to Fail: Cannabis and the New Green Economic Revolution 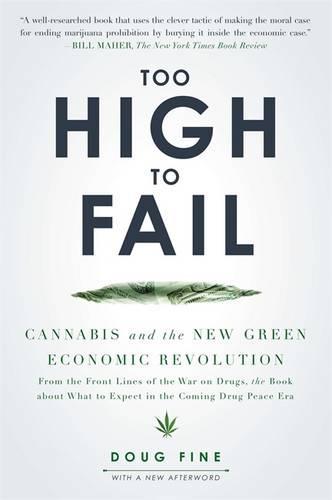 Too High to Fail: Cannabis and the New Green Economic Revolution

From bestselling author Doug Fine comes the first in-depth look at the burgeoning legal cannabis industry and its power to reshape the American economy. The War on Drugs Has Failed, costing taxpayers a trillion dollars and turning our nation into the most incarcerated society in history. This concerned critically acclaimed investigative author Doug Fine. Determined to examine what the US balance sheet will look like when the War on Drugs ends, Fine spent a year in the hills of California’s Mendocino Country, where county law enforcement in fact issues permits to cannabis cultivators for a fee. Braving incomprehensible federal policies and questionable raids, Fine followed one farmer’s cannabis plant, named Lucille, from planting to patient. Fine’s results were astonishing. Beyond its proven effectiveness as a palliative medicinal treatment, cannabis’s wider uses (from industrial to social) have the capacity to immediately play a significant role in remedying the US economy while striking a crippling blow at drug cartels. Legalized and taxed like alcohol, cannabis could introduce a quick half-trillion dollars into the legitimate American economy within a decade, help reslove the United States' overcrowded prison crisis, and ultimately jump-start an American agricultural and manufacturing revival. Covering everything from a brief history of hemp to a rundown of cannabis’s contributions to Mendocino County (several billion dollars annually, to start with), Too High to Fail is at once penetrating in-person reportage, a fascinating memoir, and a persuasive and patriotic argument for ending the War on Drugs immediately. ‘A well-researched journey into the world of legal cannabis farming and a funny, maddening account of American farmers’ travails under federal persecution on an island of legality.‘ Outside 'A captivating, solidly documented work rendered with wit and humor.’ Kirkus Reviews (Starred Review) Connect Online www.dougfine.com