Nene: The Queen of the Magazine Wars 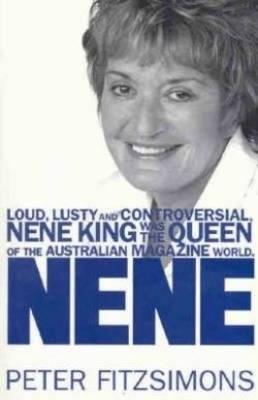 Nene: The Queen of the Magazine Wars

With Magazine Wars, a new ABC drama series from the makers of Paper Giants: The Birth of Cleo, set to recreate Nene King’s heyday presiding over WOMAN’S DAY in the race for ratings, Peter FitzSimon’s biography of Nene takes us behind the scenes of Nene’s triumphs – and tragedies. It’s 1987. Big hair and shoulderpads rule. Flamboyant deputy editor Nene King storms out of NEW IDEA to become editor of Kerry Packer’s WOMAN’S DAY, determined to overthrow NEW IDEA and her former boss Dulcie Boling’s supremacy. What followed was the rise of celebrity and gossip-fuelled journalism, a world where Nene reigned supreme. Even the once untouchable Royals - Charles and Diana, Fergie and Andrew - became fodder for the magazines' ratings war.Famous for her friendship with the Packer family, infamous for her publication of Fergie’s toe-sucking picture, Nene’s own life has not been free from tragedy. Her beloved husband, Patrick, went missing while diving with friends off Bondi. His body was never recovered. When the shock of the tragedy saw Nene end up in Narcotics Anonymous, she realised it was time for change. Retiring from the world of magazines, gradually Nene took back her life …Now, in 2013, as Paper Giants: Magazine Wars airs on the ABC, Nene brings readers right up to date with the continuing ups and downs of her rollercoaster life, when, deceived by people she trusted, Nene lost her home and all her savings. As Nene has said, ‘it’s a personal journey, it’s all I can do, the triumphs and the tragedies. And I’m sure you learn more from my mistakes than from my achievements.’