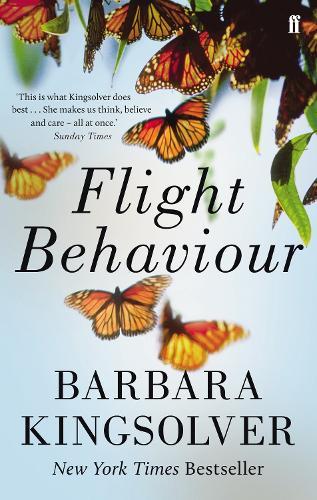 The flames now appeared to lift from individual treetops in showers of orange sparks, exploding the way a pine log does in a campfire when it is poked. The sparks spiralled upward in swirls like funnel clouds. Twisters of brightness against grey sky.
On the Appalachian Mountains above her home, a young mother discovers a beautiful and terrible marvel of nature: the monarch butterflies have not migrated south for the winter this year. Is this a miraculous message from God, or a spectacular sign of climate change. Entomology expert, Ovid Byron, certainly believes it is the latter. He ropes in Dellarobia to help him decode the mystery of the monarch butterflies.
Flight Behaviour has featured on the NY Times bestseller list and is Barbara Kingsolver’s most accessible novel yet.

Since 2004, the author and her family have lived on a farm in southern Appalachia, and it is this setting that provides the inspiration for Flight Behaviour.

The novel opens with the image of a woman in flight. On the way to meet her young lover, Jimmy, farmer’s wife Dellarobia Turnbow, sees a silent ‘lake of fire’ from atop a mountain. Alarmed by the sight, she retreats, only to discover later that the lake of fire is in fact millions of monarch butterflies, displaced from their normal habitat in Mexico due to the effects of global warming.

It is this phenomenon that propels Dellarobia away from her ursine husband Cub, children Preston and Cordelia and mother-in-law Hester, and towards Barack Obama-like scientist Ovid Bryon and the mysterious nature of his butterfly research.

This book is an uneven telling of a heroine’s journey. The depiction of the unhappy rural wife is not new, and the other characters mostly fall into stereotype. Additionally, Kingsolver’s prose can be overwritten. Where the novel really soars, however, is in the theories behind the butterflies’ migratory patterns and the arguments surrounding global warming.

And, of course, Kingsolver’s language, when not dense, can be superb. On imagining the touch of her lover, Dellarobia considers: ‘the way he closed his fingers in a bracelet around her ankles and wrists, marveling at her smallness, gave her the dimensions of an expensive jewel rather than an inconsequential adult.’ Scientifically examined, but just so.

Those who enjoy Kingsolver will appreciate the depth of research that the author has put into this book. For others, it’s a chance to see an environmental message take wing.

Nicole Lee is a writer and actor living in Melbourne. When she is not prancing around a stage or writing furtively at the back of a café, she can be found working at Readings St Kilda.

On the Appalachian Mountains above her home, a young mother discovers a beautiful and terrible marvel of nature: the monarch butterflies have not migrated south for the winter this year. Is this a miraculous message from God, or a...